Today, Le Petit Fillan is a tranquil haven in the centre of Sandton but it was once part of three large farms in the area. One of the farms was owned by the GILFILLAN family after World War II. The farm was a dairy farm supplying milk and cream. This elegant and beautifully decorated house was recently opened as a luxury guest house, after suffering a serious setback in October 2008 when a fire almost destroyed the dream. It was given a French name as the French school, Ecole Jules Verne is behind the guest house.

Littlefillan was the name given to smallholdings in the Sandton magisterial district. It was properly named Littlefillan Agricultural Holdings, and was between Parkmore and Morningside. The holdings consisted of 2-hectare plots which originally comprised a small farm commonly known as "Gilfillan's little farm" - derived from the owner's name, Noel Hamish GILFILLAN. The family were part of the 1820 British Settlers. Gilfillan is an old Scottish surname from Fife, derived from the Gaelic "Gille Fhaolain" which means "servant of St. Fillan".

William Frederick Anderson GILFILLAN was born 27 Jan 1796 at Elizabeth Castle, Jersey, Channel Islands, the son of Lieutenant John GILFILLAN and Elizabeth BRIDGES. William was baptised on 20 Feb 1796 at a service attended by the son of King George III, Prince William Frederick , Duke of York, who was Commander-in-Chief of the British Army and was on an inspection tour of Jersey Island. William first arrived at the Cape in 1812 as an Ensign in the 60th Rifles. He stayed until 1818 but returned as an 1820 British Settler in 1820, onboard the Zoroaster with Thornhill's Party. His brother, Adam (1800-12 Jul 1874), was also onboard. Because William was still a paid military officer, he does not appear in the official Settlers list. William married Anna Margaret THORNHILL. He became the first Resident Magistrate of Cradock. He died in Cradock on 04 Sept 1855 and was buried at St. Peter's Church Cemetery, Cradock. The couple had 12 children, one being Edward Stockenstrom Lodewikus GILFILLAN born 14 Mar 1838. The family is mentioned by Lucy GRAY in her book, A Victorian Lady at the Cape 1849­1855. Anna died on 13 Feb 1879 and was buried at St. Peter's Church Cemetery, Cradock.

Edward married Charlotte Maria Louise FLEMMER at St Peter’s Church in Cradock on 07 Sept 1864. Charlotte was born 18 Apr 1844 in Korsor, Denmark, daughter of Dr. Christian August FLEMMER and Betty ABO. Her family immigrated to the Cape in 1852 and settled in Cradock. Edward was a member of the Town Council and served a term as Mayor. He was involved with the founding of Cradock Boys’ High School. Edward died at his home "The Abbey" in Bree Street, Cradock on 20 Jul 1908. The couple had six children, including Douglas Flemmer GILFILLAN born 25 Jun 1865 in Cradock.

Douglas matriculated from Cradock Boys’ High School and decided to become a lawyer, like his father. In those days, no university degree was required. Instead, articles were served and exams written. Douglas did his articles with the Cape Town firm, Reid & Nephew. He had to wait until he turned 21 in 1886, before being admitted as an attorney. While living in Cape Town, he stayed at a boarding house in Moullie Point run by Maria Elizabeth DE JONGH (maiden name VON SCHONNBERG), the widow of Lourens DE JONGH. Here he met one of the daughters, Sophia. When he returned to Cradock in 1886, they stayed in touch. In 1888 he moved to Pretoria where Sophia's brother James had a legal practise. In 1889 Douglas moved to Barberton where he bought a share in the legal practise of Henry CALDERWOOD. He married Sophia agdalena DE JONGH on 10 Apr 1890 in Pretoria. The couple lived in Barberton, where Sophia often played piano at concerts. The piano was a wedding gift from Douglas. While living in Barberton, Douglas founded the forerunner of the Wildlife Protection Society. In 1892 the couple moved to Johannesburg, where their four children were born - Vera Louise, Dagmar Marie, Noel Hamish and Angus Edward.

When tensions started rising between the Boer government and the Uitlanders in 1895, a Reform Committee was formed by Douglas and others, to fight the cause of the Uitlanders. Because of the Jameson Raid, the Reform Committee members were arrested and jailed in Pretoria. They were brought to trial and sentenced to death. This was later reduced to a fine of £2000 pounds. Douglas was released when Sir Abe BAILEY paid his fine. Douglas returned to his legal practice.

In 1898, the family moved to Belgravia, Johannesburg, where they built a house called "Elgin", which cost £8000. In that year, Douglas went into partnership with Richard BAUMANN (later BOWMAN) and so the legal firm of Bowman Gilfillan was founded.

In 1899, tensions rose again and war rumblings were heard. Douglas sent Sophia and the children by refugee train to Queenstown, where they stayed with her sister. When war broke out in October 1899, Douglas left for Pietermaritzburg where he helped form the Imperial Light Horse and became a Lieutenant. He was at the Relief of Ladysmith, and also saw action at Colenso, Spion Kop, Vaal Krantz, Tugela Heights, and the Relief of Mafeking. He was awarded the Queen’s Medal with 4 clasps and ended his service as a Captain.

After the fall of Pretoria, Douglas was appointed a judge of the Special Court for the Witwatersrand. He also served as Magistrate for Germiston and Boksburg. After the war was over, he returned to his legal practice. The family moved back into "Elgin", which had been used by the British Army. Their neighbour was now Lord KITCHENER who had moved into "Friedenheim" next door. In 1908 Douglas was one of the founders of the South African Field Trial Club. Douglas served on the governing board of Jeppe Boys’ High School for many years. The family sold "Elgin" and Douglas and Sophia moved to Parktown before settling in Linden. Sophia died on 08 Jan 1939 and Douglas moved in with his son Noel. Douglas died on 05 Sept 1948 at the home of his son Angus.

Noel Hamish GILFILLAN was born 25 Dec 1902 in Johannesburg. He was educated at Jeppe Boys', Hilton College and the University of Cape Town. After completing his law degree, he was recommended for a position as private secretary to Sir Ernest OPPENHEIMER and spent two years at Anglo American, before setting up a legal firm with Thomas KINNA. He married Ellen Marjorie MORRIS, the eldest daughter of Dr. Frank and Emily MORRIS of Cape Town, in Jul 1928 at St Georges Church, Parktown. Ellen, known as Marjorie, was the daughter of Dr. Frank Mayo MORRIS. He came to the Cape during the Anglo-Boer War and settled in Cape Town where he practised as a medical doctor. Ellen was born in Cape Town and educated at St Cyprian's School and the University of Cape Town. Noel and Ellen had three sons - Brian Mayo, Graeme Douglas and Robin Francis. In 1913, the family lived at 30 Bolton Road, Parkwood. During World War I, Noel served in the South African Air Force. In 1936 he joined his father's practise as a junior partner. Here one of his clients was De Havilland and Noel became an expert in aviation law.

When war broke out in 1939, Noel joined the Imperial Light Horse but was later transferred to the South African Air Force. In 1941 he was sent up North, with the rank of Captain. In 1943, he was allowed to leave the SAAF due to ill-health and returned to Bowman Gilfillan. In March 1946 the family moved to a new home, Littlefillan, a 75-acre farm. Here Marjorie built up a Jersey herd. Noel served on the governing board of Hilton College, was president of the Wildlife Society, and the 1820 Settler Association. He later bought a farm in Dullstroom which he called Elgin, and turned it into a trout farm. In 1967 he retired from Bowman Gilfillan. He died in 1977.

Brian Mayo was educated at Parkview Boys’ School, Parktown High, Hilton College, the University of Cape Town, and Oxford. He became a director at Bowman Gilfillan & Blacklock. He married Jennifer Mary GRIFFITH and the couple had three sons and one daughter. He died on 12 Dec 1984. In 1985 the family lived at Littlefillan.

Graeme Douglas was born in 1931. He was educated at Parktown School, Pridwin, Hilton College and the University of the Witwatersrand. While at Hilton, he became interested in taxidermy and birds mounted by him are displayed in the Hilton School Museum. He played rugby in the Natal Midlands XV, and for the Transvaal under-19s. On 26 Jul 1950 he was killed in a motorcycle accident on Louis Botha Ave, Johannesburg. In 1965 his father donated a rugby field and pavilion to Hilton College, named the Graeme Gilfillan Pavilion.

Robin Francis was born in 1934. He was educated at Parktown School, Pridwin and Hilton College. He played for the Natal Schools rugby team. He started a degree at the University of Cape Town but later changed to a Business Administration course at the Manchester University Institute of Technology. While there he played for Sale Rugby and was selected for a trial for Scotland. Just before the trial he suffered a concussion which ended his rugby career. He worked for Dove Insurance Company, which had been set up by his father. Later he formed Lenagil Investments. He married Bernice BRAMSON and they had four children. Robin died on 09 Nov 2001 in Pietermaritzburg.
at May 20, 2009
Email ThisBlogThis!Share to TwitterShare to FacebookShare to Pinterest
Labels: Farms
Newer Posts Older Posts Home
Subscribe to: Posts (Atom) 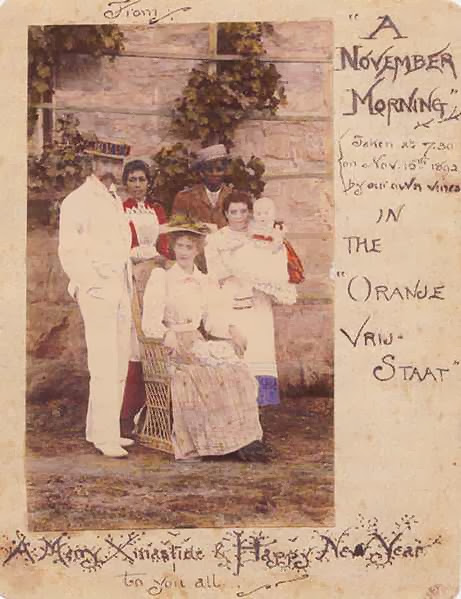